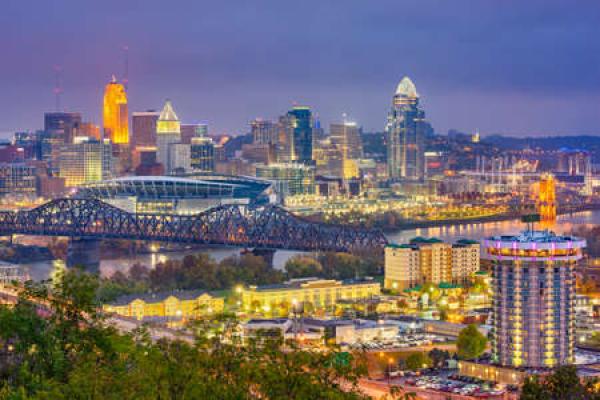 Cincinnati FC is currently in its second season of playing in the state-of-the-art TQL Stadium. The completion of construction in 2021 was the conclusion of a years-long project to bring Major League Soccer to The Queen City.

Back in May 2015, an ownership group led by Carl Linder III announced it would be bringing a professional soccer team to Cincinnati. The team would play in the United Soccer League, the second division of American soccer, at Nippert Stadium on the University of Cincinnati campus. The team broke USL attendance records, and the ownership group was subsequently granted an MLS expansion franchise. The squad would continue to play in Nippert Stadium on a temporary basis, but they would eventually need a new home with more modern amenities.

Ground was broken on the new stadium in December 2018 and foundation work began the following July. Work on the project continued right through the COVID-19 pandemic with the upper bowl being completed in spring 2020. With steel work and the canopy roof finished that summer, the grass, seat and scoreboard installations began that fall.

The exterior work was done by Feb. 2021 after permanent signage was installed. The interior work was completed that spring before the field saw its first match between Cincinnati and Inter Miami FC. Populous, MEIS Architects and Elevar Design Group designed the stadium while Turner Construction served as the general contractor, working alongside Jostin Construction. Machete Group provided oversight on the project.

In all, the club’s new home cost more than $250 million, the vast majority of which was paid for by ownership. The 12.4-acre stadium can hold up to 26,000 spectators and contains 59 luxury suites, the most of any soccer-specific MLS venue. In addition to the suites, there are four club areas that will hold more than 4,000 people combined.

The footprint of the stadium is a massive 518,000 square feet. Every seat is covered by the 360-degree canopy roof. There’s also a 360-degree continuous bowl around the stadium in the style of major European soccer clubs. The stadium boasts the largest videoboard in all of North American soccer.

The amenities in the stadium are also spacious as the concourses are 30 feet wide. There are six entrances and a total of 30 bathrooms located throughout the venue. Fans can stay close to the action as the distance from the closest seats to the touchline are 15 feet on the west side of the stadium and 18.5 feet on all other sides.

The players have been well taken care of too, of course. The home team locker room stretches to 10,350 square feet and includes a lounge, coach’s offices, a warm-up area and an athletic training suite. There are also four other team locker rooms and two referee locker rooms.

The stadium is capable of handling a large media contingent as well with a press box seating capacity of 75. There are three TV booths, four radio booths, six broadcast truck bays, an auxiliary media booth and a 700 square foot control room. Fans, meanwhile, can enjoy a 9,000 square foot, two story team store on the Northeast side of the stadium.

The exterior of the stadium is wrapped by more than 500 vertical aluminum fins, which make up an integrated LED video display system. At night, the club lights this up and the entire side of the stadium displays an impressive show of lights that can feature team-positive messaging. There is also a one-acre East Plaza with a large staircase that faces the historic “Over the Rhine” neighborhood.

The stadium is already being used for purposes beyond just Cincinnati FC matches. It’s hosted two Team USA men’s soccer match and one for the USA women as well. Earlier this year, legendary rock band The Who performed on the field.

At Construction Protection Systems, we’re proud to have played a small part in development of TQL Stadium. Stay tuned for more updates from the makers of 1-2-3 Door Shield—the original, reusable door protection system.