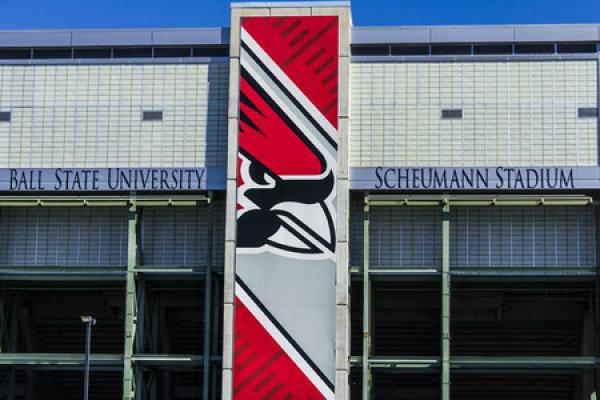 Saturday will mark the one-year anniversary of the ceremonial ribbon cutting for Ball State University’s new Foundational Sciences Building. The construction of the new academic building is part of a multi-step process to replace the aging Cooper Science Building while also increasing the university’s capacity to handle STEM students. Students who take courses in biology and chemistry are now in their second year of enjoying the amenities offered by the new Foundational Sciences Building.

Although the ceremonial ribbon cutting was held just about a year ago, the biology and chemistry departments of Ball State University actually transferred from the Cooper Science Building to the Foundational Sciences Building in June 2021. The fall semester began a few months later. The construction process was a rather smooth one that continued through the COVID-19 pandemic. Groundbreaking for the new building, located on the campus’ East Quad took place in early September 2019. Shiel Sexton performed the construction work for the project, which cost $87.5 million in total and was internally funded by the university.

The five story structure spans more than 205,000 square feet. It features 72 laboratories in total – 28 for teaching and 44 for research purposes. There are also six classrooms, an imaging suite, conference rooms, a research library, computer labs, collaborative spaces, an aquatics suite, and faculty and graduate offices.

There are areas throughout the building where students can learn beyond the classroom, featuring comfortable seating, rolling whiteboards, and interactive screens. The amenities represent a significant upgrade over the previously used Cooper Science building, allowing both students and faculty to be on the cutting edge of both education and research. As an added bonus, the new building has some of the best views on campus.

The roughly 900 chemistry and biology students of the Ball State University will be able to benefit from the increased space, new equipment, and more places to study. Compared to the old building, the Foundational Sciences Building offers students far more space to collaborate, study together, and work between classes. According to the university’s website, the design of the building was developed with several goals in mind. These included planning for flexibility and long-term change, wellness and sustainability, planning for potential future expansion, and allowing for easier cross-collaboration between departments.

The construction of the new Foundational Sciences Building was not a standalone project, it was part of a larger vision of Ball State University. The school is trying to help accommodate the growing need for STEM professionals in both Indiana and workplaces across the country, while doing a wholesale revamp of the East Quad of the Campus.

The first phase of the plan was complete when a new Health Professionals Building opened just south of the eventual location of the Foundational Sciences Building in 2019. The 165,000 square foot building houses the university’s College of Health. The brick, glass, and limestone structure cost roughly $62.5 million to build and features classrooms, offices, laboratories, clinical spaces, a resource hub, and simulation labs.

The third and final phase of the project is ongoing and involves renovating part of the Cooper Science Building while also demolishing another part of it. The current renovations are taking place in the west end of the building and encompass a total of 160,000 square feet. The newly-renovated space will house the geography, geology, astronomy, physics, natural resources, and environmental management. The renovation is scheduled to be completed in April 2023. After that, the 130,000 square foot east end of the structure will be demolished in December 2023.