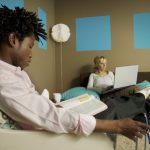 At Baylor University in Waco, Texas, residents of Penland Hall are enjoying a host of new amenities added during an extensive $19 million remodeling effort that was completed in late 2016. These include new study spaces and bedroom furniture, updated bathroom facilities, and a welcoming lobby featuring games and televisions. Since it reopened, Penland Hall has also become a co-ed dorm for the first time in its 56-year history.

Originally constructed as a male dormitory in 1960, Penland had fallen into disrepair in recent years, gaining a reputation among students as one of the less-desirable housing options on campus. Now, however, the residence hall offers some of the most modern and comfortable accommodations at Baylor.

The remodel of Penfield Hall is the latest in a series of residence hall renovations completed at Baylor University over the course of the past three years. Campus administrators plan to continue making improvements to one residence hall each year until every hall has been remodeled for the future.

“When we built East Village (residence hall) two years ago, what that did was it gave us an opportunity to take one dorm down a year and renovate,” said board Chairman Richard Willis in an interview with the Waco Tribune-Herald. “We’ll keep moving throughout the university to keep rehabbing the dorms for the students.”

Baylor plans to renovate seven additional residence halls by the summer of 2021. When all is said and done, the ongoing project is expected to cost about $140 million.

Here at Construction Protection Systems, we’re proud to have had the opportunity to play a part, however small, in the growth and development of Baylor University. Stay tuned for more updates from the makers of 1-2-3 Door Shield—the original, reusable door protection system.