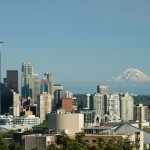 Constructed on the site of the former Ballard Library, the Ballard West Mixed-Use Building constitutes the latest initiative in Seattle’s ongoing effort to provide its citizens with affordable, environmentally friendly housing options.

The six-story building, in addition to housing over a hundred workforce and affordable housing units, will also be the new home to nearly ten thousand square feet of commercial space. City officials are hopeful that the building will be a boon to the economy of Ballard – a neighborhood which has struggled to combat homelessness for years.

The building was designed with LEED Certification in mind. Likewise, it features a number of innovative features that promote efficient energy use and environmental sustainability. The innovative heat recovery system uses warm air drawn from an underground parking garage to supplement the building’s water heaters. A green roof provides insulation from solar gain and further reduces the energy load required to maintain its internal temperature.

The 200-foot long structure was constructed in three distinct sections in an effort to make it blend seamlessly with the existing architecture in the neighborhood. The project, which began in 2011, was finally completed at the end of 2014.

The Ballard West Mixed-Use building represents a paradigm shift in modern American civic planning. This holistic approach to urban design aims to provide residents of the neighborhood with cost effective spaces in which to work and live without sacrificing construction quality. By housing commercial and residential space within the same four walls, the mixed use ethos also has the potential to dramatically reduce fuel consumption among the building’s residents.

It’s been exciting to follow this project from conception, and play a small part in its completion. We hope that in the future more cities will emulate Seattle’s efforts to provide its citizens with forward-thinking housing options such as the Ballard West Project. Stay tuned for more updates from the makers of 123 Door Shield – the original, reusable door protection system.