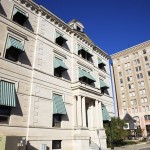 In 2003, the largest credit union in the country opened a branch office in Pensacola, Florida with just 60 employees. Today, their Northwest Florida office employs more than 4,000 workers. By 2020, Navy Federal expects that number to reach 10,000. To accommodate this astounding growth, the credit union is building a new 1.5 million square foot facility in Pensacola. The first phase – a 400,000 square foot office building which will house 2,000 employees – is slated to open this summer. Once the second, 1.1 million square foot second phase is complete, the facility will have room for 7,000 employees. The entire project is expected to be finished in late 2018.

Navy Federal’s rapid growth began in 2008 when they relaxed their membership requirements to allow members of other branches of the U.S. Department of Defense and civilian contractors to join. Since then, they’ve opened about 12 new branch offices annually in places all across the globe.

“The reason for the expansion is for the significant growth in membership over the last several years,” said Debbie Calder Navy Federal’s executive vice president of Greater Pensacola operations in an interview. “We need to hire more people to take care of our members.” Calder then went on to say that the Pensacola branch is currently Navy Federal’s largest operation, and that they expect the bulk of their future growth to be centered in the Northwest Florida region as well.

This year, Navy Federal Credit Union ranked 44 in Fortune’s list of the 100 Best companies to Work For. This is the sixth time they’ve appeared on the list. Soon, thousands of people in Northwest Florida will have the opportunity to join the ranks of Navy Federal’s workforce.

Here at Construction Protection Systems we’re proud to have had the opportunity to play a part, however small, in the completion of this enormous undertaking. Stay tuned for more updates from the makers of 1-2-3 door Shield – the original, reusable door protection system.