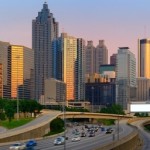 One of the largest insurance providers in the country is preparing to settle into some impressive new digs in the suburbs of Atlanta, Georgia. State Farm’s new regional headquarters will be housed in a 13 story tower with 2.2 million square feet of office space. The building will include an additional 100,000 square feet of retail, restaurant, entertainment space and a hotel. It’s conveniently located next to a MARTA transit station, providing the company’s employees with an efficient and cost-effective way to commute to and from work. The headquarters was designed by architecture firm Cooper Carry & Associates, and is being constructed by Dallas-based developer KDC.

State Farm currently employees about 5,000 employees throughout the Atlanta area, and they plan to increase than number to 8,000 once the new headquarters is complete. They’re currently working to fill 1,500 new positions in anticipation of the tower’s completion.

The company’s extensive growth in the Atlanta metro area began in 2013 when they purchased roughly 300,000 square feet of office space in a building in the nearby suburb of Dunwoody. Now, State Farm is subleasing some of that space to other companies as they prepare to migrate the bulk of their local workforce to the new headquarters. Construction is expected to be complete by the end of the year.

Here at Construction Protection Systems we’re proud to have had the opportunity to play a part, however small, in the development of what is sure to be a major economic boon to the Atlanta metro area. Stay tuned for more updates from the makers of 1-2-3 Door Shield – the original, reusable door protection system.