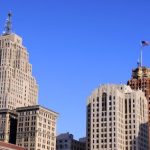 Thanks to a series of bold investments from Detroit-based developers Sachse Construction, the Motor City is now home to a brand new 200,000-square-foot mixed-use development in the historic neighborhood of Brush Park. In addition to nearly 200 residential units, The Scott at Brush Park will also include a number of commercial offerings, including a coffee shop, restaurant and dermatology office which opened in May, 2017.

The residential space in The Scott is primarily geared towards “millennials and empty nesters,” featuring a number of two-bedroom apartments that can either be occupied by a single occupant, or split with a roommate. The Scott’s developers sought to maximize the space in the complex’s residential units, offering much more room than many of the more cramped options in Midtown Detroit. The apartments all have 9-foot ceilings and sliding bedroom doors, making them feel even more spacious than they would otherwise. The exterior-facing apartments also include balconies overlooking Woodward Avenue and Erskine Street.

This isn’t the first major development project to come to Brush Park in recent years. Thanks to the neighborhood’s close proximity to both Midtown and Downtown Detroit, its pedestrian-friendly streets and historic atmosphere, Brush Park has attracted the attention of several other real estate investors and developers as well. Dan Gilbert, founder of Quicken Loans Inc. and owner of the Cleveland Cavaliers, is currently in the process of developing his own $70 million residential complex on a nearby 8-acre parcel of land.

Here at Construction Protection Systems, we’re proud to have had the opportunity to play a part, however small, in the evolution of Detroit’s historic Brush Park neighborhood. Stay tuned for more updates from the makers of 1-2-3 Door Shield—the original, reusable door protection system.